So there’s this gay guy Keith Mills who is voting no.  As we get nearer to voting day, some of the no side are (ironically) rolling him out to bolster their claims. I read the article and I was amazed and angered at the doublethink and obfuscation. So I decided to take his argument apart.

1. He believes that civil partnerships are a better way of legally recognising same-sex relationships. This is a misunderstanding of the legal principles involved. Believing something is better doesn’t make you right. You have to have evidence, and he provides none. He’s wrong because a married couple enjoy constitutional as well as legal protection. A civil partnership couple only enjoy legal protection. Legal protection can be taken away, amended or reduced by an Act of the Oireachtas. Constitutional protection can only be taken away by a vote of the people.

Mr. Justice Kevin Kearns explains that, and more in this very clear article which explains what the referendum is all about in layman’s terms. I recommend you read it before you make up your mind.

2. Marriage is not so clearly defined in the constitution that it allows for marriage equality. He claims that “Successive Attorneys General have told their government colleagues that same-sex marriage is in conflict with this”. Well d’uh, that’s what the referendum is about. He’s making a very sneaky obfuscation there.

3. He states that “Obviously other family units exist, and children can be raised successfully outside of traditional marriage” then goes on to contradict himself “The result of allowing same-sex couples to marry is that agencies that are entrusted with finding parents to adopt and foster children cannot legally favour families that can provide a mother and a father, which all evidence suggests is the best environment for children”. The poor man is suffering from doublethink, and in fact the evidence is that there is no difference in outcomes for children. Here is a list of long term studies that prove that there is no difference.

He makes some other points too, but they’re diversionary and unimportant compared to the clangers above. He seems to be just adding points for the sake of it, rather than being honest with a clear and concise argument. But he has to be unclear, because he has no evidence for his claims.

So I encourage you to vote Yes for Equality.

Lately I’ve been getting lots of emails enquiring about synthy stuff. Usually this is fun, a bit of techno banter, learning new stuff and maybe meeting new people. But then there are the ones without a real name, no signature, and no manners.

I won’t reply to those. Life’s too short for rudeness.

In alphabetical order. And OK, it’s not purely information, there is some opinion here. You can probably guess from the links the ones I really don’t like 🙂

This new pack consists of the classic sounds from the classic digital synthesizer used by Jean Michel Jarre on his 1988 album Revolutions. Over 1.4GB* of 24 bit sounds, perfectly mapped and looped in Kontakt for you to play, just like the original keyboard.

Creating this demo was interesting. Listening closely to the original, I realised that it is most likely sequenced. The left hand/ bass part is a very very consistent 1/8th note loop with an accent on the 1. The notes are exactly an 1/8th in length as well, which works fine if you stick to the DCA envelope times on the original synth. There seems to be a slightly longer note length on every second beat 4. The right hand velocity doesn’t vary at all, there are no accents except for the fourth “chord” which is only two notes- the top note is programmed louder so it fits in with the other 3 note chords. There is a little bit of phaser mixed in, and the reverb sounds like the short, bright ambience programme typical of the AMS RMX16.

So the above demo is exactly what you’d get from the synth itself, without any “mixing”.

There’s a book out criticising Bono, written by one Harry Browne. I haven’t read it. Apparently sales are abysmal. But I’ve read the articles by those caviar socialists Monbiot and Eagleton. Then there is the (as always) brilliant interview work by Gay Byrne (it’s an hour but it’s worth it).

Bono is like the court jester, because he can get away with criticising the “king”. Remember his messing around with Pope John Paul? There’s all the laughing and joking with Bush, but he got stuff done that otherwise would not have happened. Yes Bono’s not the brightest, but he, basically, gives away a lot of money. He supports around 30 charities by himself, the band support a bunch more. And U2 have given away a large chunk of money for music education in Ireland.

Monbiot is babbling about how Bono is stealing the limelight from “real” Africans with “real” problems- but he didn’t provide any evidence of that, despite writing a lovely “academicky” article, with references and all, attacking Bono. I’ve searched around and found only scam “African” charities, I wonder If Monbiot is ignoring those? I’m open to correction on that one though.

The Eagleton article, and Browne’s book too, is a hack job in my opinion. Let’s go through it:

1. Eagleton makes the assumption that being a christian implies a lack of style. As Bono describes in the recent Gay Byrne interview, their street gang dressed as OTT punks before they joined the prayer group, though it did become an issue afterwards.

2. Eagleton’s comment about “the postmodern decline of politics into spectacle” is just stupid. C’mon, look at any newspaper from the 19th century, early political campaigns, or early Punch.

3. Another assumption- “why Bono is both maverick and conservative.” Bono explains that one in the interview, when he talks about including the left and the right in his activism. Basically he uses his fame to get people in power to commit to things they might not do otherwise. He gets them to do good instead of confronting them and getting nothing.

4. Eagleton cherry picks from Viz, a magazine of vastly greater wit than his own- their hilarious description of Bono “”the little twat with the big heart”.

5. “If Bono really knew the history of his own people, he would be aware that the Great Irish Famine of the 1840s was not the result of a food shortage”. Bono has often said that it is corruption that is the problem (again, see Gay Byrne interview) and that is the case with the famine. I don’t know if that’s in the book or if Eagleton made that one up as well.

Everyone is failing to understand the function of tax. Again, Bono answers that question in the Gay Byrne interview, where he points out that Ireland has a tax system designed to attract foreign investment. He also points out that U2 is a business (the implication being that they employ people and need to stay in business). Furthermore if the writers did their research they would be aware that it is only the publishing arm that is based in Holland. All of U2’s other business is based in Ireland. However copyright and tax is a complicated business and is possibly beyond his comprehension. Not surprisingly it’s beyond Joan Burton as well. The fact is that prior to the capping of the Artist’s Tax Exemption scheme, U2 were not taxed on earnings from publishing. I would imagine that in order to maintain the business and to keep Irish people employed, they decided to be tax efficient.

Bono might be annoying. But he is a genuine christian. 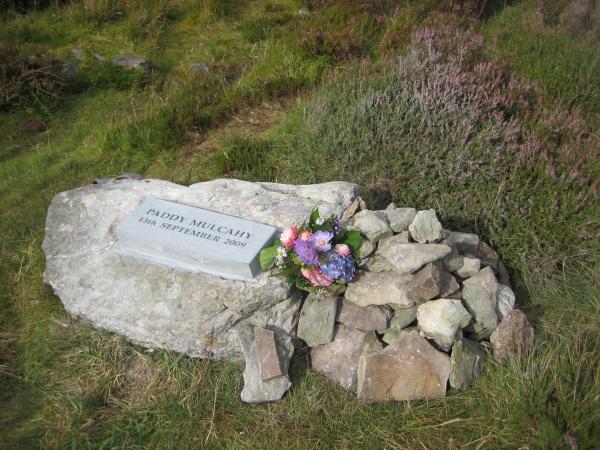 My brothers and I put this on the stone on Mushera where my father passed away. There is a lovely article here by the people of Millstreet.